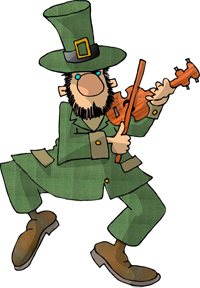 Today was St Patrick’s Day, so we celebrated the wee bit O’ the Irish on my side of the family. A Tip O’ the hat to the Garvin kin!

Lunch was a delight..little potatoes smothered in Salsa verde, green salads and succulent slabs of corned beef and cabbage rolls. When we thought we could eat no more,  out came the fresh applesauce cake with green whipping cream and lucky coins….mmmmmm. My guess is that if St. Paddy ate like this he was probably quite rotund lol.

We celebrated with a poem called a Limerick, also an Irish tradition.

Limericks are one of the most fun and well-known poetic forms. No one knows for sure where the name “limerick” comes from, but most people assume it is related to the county of Limerick, in Ireland. They are short, rhyming, funny, and have a bouncy rhythm that makes them easy to memorize.  My Grandson Ethan Hallex wrote this Limerick. Hat’s off to him too!

There once was a man named Delete
His name he would have to repeat
He liked to play Lego
With his pal Eggo
Which was his favorite to eat.

I wonder if Eggo was green? Hope your day was a fun as ours 🙂

There was a young fellow named Hall
Who fell in a spring in the Fall.
T’would have seen a sad thing,
had he died in the Spring,
But he didn’t—he died in the fall.

A Wife, Mother, Grandmother with tons of experience in the arena called *Life* I love information, and endeavor to utilize it as practically as possible. I have worked as a Healthcare coordinator, HR Manager for over 26 yrs, and still employed (19 +years) as a Property Manager of a large complex (I joke that I’m the mayor of a small city). I have raised 4 children, one of whom (a daughter) ❤️has recently completed suicide,which has changed my life forever. I have 8 lovely grandchildren. I love to write poetry and short stories, cook, explore religious experiences and be in charge of stuff :) View All Posts

This site uses Akismet to reduce spam. Learn how your comment data is processed.